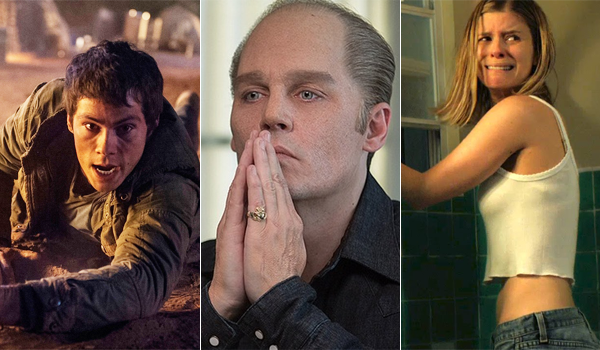 The weekend of September 18 promises to be a busy one. Our forecast and analysis...

- The first film was a certifiable hit among fans and casual viewers, earning over $102 million domestically as it displayed strong legs following a $32.5 million debut.
- The franchise's popularity has continued to grow since then with increased book sales and an expanding audience.
- Social media activity -- especially on Twitter -- has been considerably stronger than that of its predecessor, while nearly matching that of Insurgent.

- The young adult phase probably only has so much room to grow at this point, and reviews -- while solid -- don't suggest Scorch Trials will change the game for those on the fence.
- With Black Mass generating strong buzz, some of the potential 20- and 30-something audience could check that out instead.
- Facebook growth is very respectable with almost 3 million total fans, but is adding new fans at a noticeably slower rate than Insurgent.

- Since the first trailer, it's been clear that Johnny Depp has immersed himself into one of his most unique roles in years. Fans are definitely rooting for this to be his commercial comeback.
- Advance weekend sales on Fandango are reportedly neck and neck with Scorch Trials, which is unexpected given the latter's built-in fan base.
- Overall social media buzz has surged in the wake of strong reviews, most noticeably on Twitter where it outpaces similar titles by a wide range.

- Positive factors aside, the buzz around Depp's performance could still be something that doesn't fully kick in until a few days after release given the film's target older audience.
- The darkness of the film could hold it back from a Departed-like debut given the latter had Scorsese and an ensemble's worth of names -- plus dark humor -- driving its appeal.
- At the end of the day, Depp needs to prove his box office drawing power again before it can be said he alone will sell this film -- even though he most certainly will.

- Kate Mara has slowly begun to emerge as a leading presence thanks to turns in Fantastic Four and Netflix's critically acclaimed House of Cards.
- Facebook activity is surprisingly strong with over 290,000 fans entering Wednesday.

- Mara still has a long way to go before she can be considered a marquee ticket-selling name.
- Twitter and Flixster buzz are very modest, while competition in the market will further limit its appeal.

BoxOffice is projecting the top ten films this weekend will tally around $115 million. That would mark a 28 percent improvement over the same frame last year, which was led by The Maze Runner's $32.5 million debut as the top ten collected $90.0 million.

Also, please note that Everest opens in IMAX locations only this weekend. We'll include a full analysis for its wide expansion next week.

Check out our complete weekend forecast in the table below.